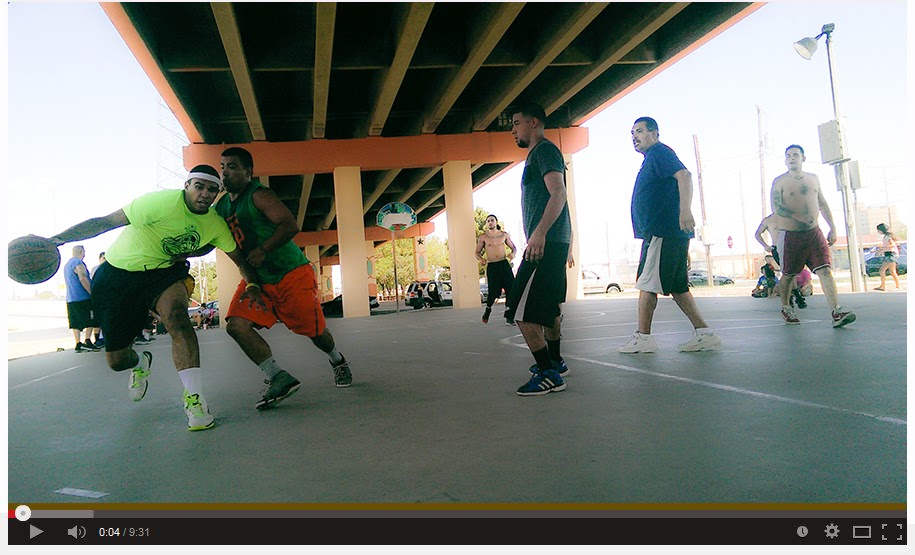 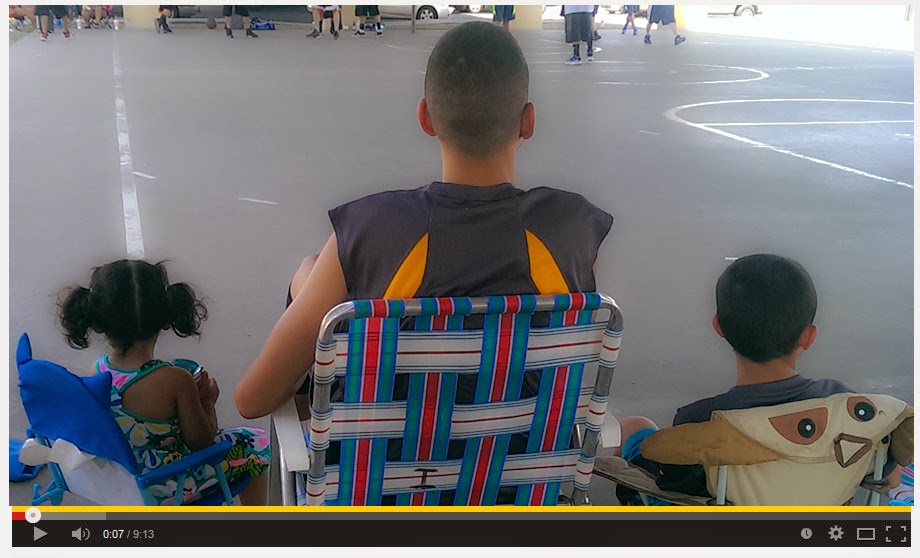 El Paso has a lot of cool spots to play a game of street ball.  All over the city.  Passing over Lincoln everyday on my way to work, I always thought how great it would be to record a game underneath the city's Spaghetti Bowl at Lincoln Park.  Featured is one of our brothers in light green, BB.Josh.

We added some intro beats from El Paso producers, check the names in the rolling credits.  The beats were productions from a beat contest probably long forgotten back during the radio days.

The videos were recorded on the mobile phone... the second in landscape.

Posted by Lecroy Rhyanes at 11:53 PM No comments:

Email ThisBlogThis!Share to TwitterShare to FacebookShare to Pinterest
Labels: BB.Josh 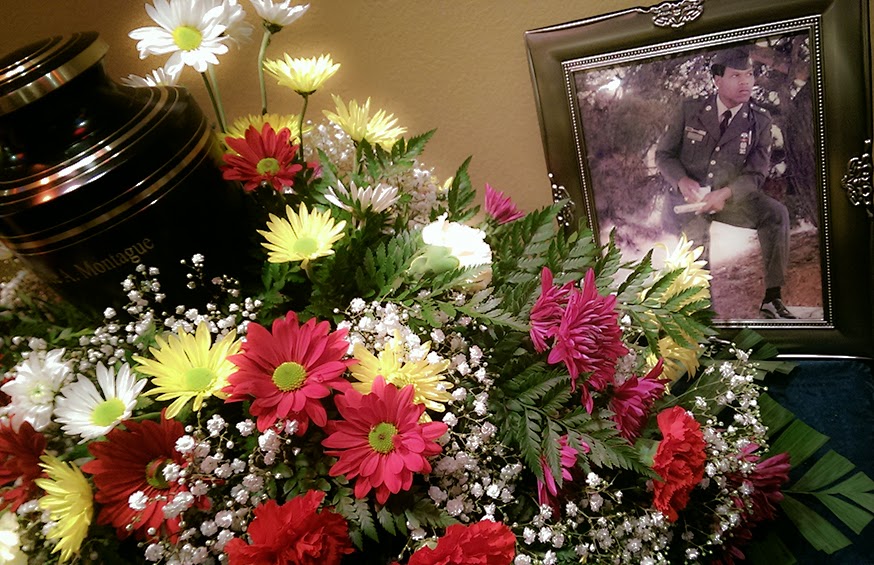 On Sunday evening, October 5, 2014, my family and I attended the viewing of Mr. Maurice Montague, Sr. joining the Montague family and friends to pay respects at the Sunset Funeral Home in Northeast El Paso, Texas.  That afternoon I had the chance to write a piece in thought of Mr. Montague and the impact he had on our lives growing up.  There were several deep stories shared that day from my brothers and several people in the community that knew Mr. Montague.  Once the pastor opened the evening, Maurice, Jr. got up to the microphone to speak.  This moved me the most considering the father/son relationship between Maurice, Sr. & Jr.  Being a first born, Jr. myself, it took a lot listening to a childhood friend speak on the passing of someone so close as his father.  It opened the opportunity for people to have the chance to get up and share their thoughts on Mr. Montague.

He's a big part of our memories coming up as children in the Northeast.  And with the piece I'm going to share below in bold, I attempted to capture that, while being true to my own relationship with the Montague family.  All my brothers (RBros) got up to share stories of Mr. Montague.  We're all 8 years apart, each with our own story of knowing Mr. Montague and getting the chance to experience the love he had for children in the community.

I hope we have it in us as a community to share stories of our elders, our children, both living and past.  Often the busy of our lives keeps us from writing.  Keeps us from documenting those stories and helping everyone understand why these lives matter.  I was born and raised in the Northeast and love this community dearly.  Though I haven't lived in many other places for an extended period of time, there is something I feel about the Northeast that is unique from anywhere else.  Whether its the stories that connect us to families that have crossed between Ciudad Juarez, Chihuahua Mexico and El Paso, Texas USA or our military base, Ft. Bliss, that brings people from all corners of the country and world to coexist.  Often our origins hold their own stories of how we got here and came to settle in the city of the sun, towards the bottom of the mountains.  My family is no exception, and its the same for the Montagues.  A native of Pittsburgh, PA, Mr. Montague's journey to El Paso was also through the military where he'd meet his beautiful wife Estela, giving birth to his son Maurice, Jr., who I called "Lil' Q". El Paso born.

Listening to those that spoke at the viewing about Mr. Montague and his impact on our lives through his love of children and sports... I wanted to put the words I read at the viewing out there.  To remember.  To document.  And to encourage us to remember our loved ones through stories.  We're not promised tomorrow and life will go on... and like us at one point in our lives there will be kids out here running around wanting to play... looking for someone that will give them a chance.

To the spirit of Mr. Montague, thank you sir, and to the Montague family we love you.

I title this an Ode to Mr. Maurice Montague, Sr.

I can still remember the first time I heard Mr. Montague.

A few miles from here at a Northeast YMCA half court basketball game. It was me at 5 years old versus a soon to be friend I'd later call "Lil' Q".

Above all other cheers for children was the voice of Mr. Montague.

His voice consumed the acoustics of the entire gymnasium, an unforgettable sound.

I remember we won that game and feeling proud, my memory drifts into a Taco Bell where my mom, Maria, and Q's mom, Estela, allowed me and Lil' Q the space to see if we'd get along... the beginning of a friendship involving our families and so many stories throughout our city's chain of basketball courts.

Mr. Montague's presence in my childhood would become monumental.

As a child, fear is a common factor in growing up and dealing with the unknown but when you were with Mr. Montague, you learned from a man who walked stomping fear beneath him.

And as a child being around Mr. Montague he made sure we understood how much he cared about us and the strength of his love.

As a coach, Mr. Montague would commandeer some of the best children hoopsters I'd ever known.  Names I'd follow years after like Terayno, Terrom, Kilo, Kello, George, I remember Ruben and the leaping ability of a youth named Robert.

Thinking back, I have no clue what my role was on a bench with such depth and talent as the Northeast Storm.  But I was there, watching a story I'd never forget.

I spent some time in the back seat of Mr. Montague's white Cadillac.  Driving around the city between games in the far east, Lower Valley, West side, or after hanging out with Lil' Q at the Northpark Mall where we were always at the card shops and arcades consuming junk food prior to watching a movie at Boomerangs Theatre... maybe something like Class Act or Menace II Society.

One story I remember is Mr. Monatague at one of our games during the McDonald summer leagues... When I was subbed in my coach on the McDonald's squad shouted, "...c'mon LeeROY, let's go!  Get aggressive!"

And as if Zeus himself screamed from the clouds above the Austin High School gymnasium, all I heard was Mr. Montague's orders to the coach, "HIS NAME IS LECROY! Boy, don't let him call you by a name that ain't yours!"

I nodded my head glancing at the coach who if my memory serves me correctly, had a blank stare, probably processing his place in the gym, which wherever we went, if Mr. Montague was there, belonged to him.

Over the years, I'd meet people that either loved or hated Mr. Montague.

And as a child, to me, Mr. Montague was one of the most powerful fathers to someone who was like a best friend... He had a superhero aura.  At war with anyone that dared step foot in his path.

He was the one who'd take me to see Malcolm X at the Basset theatre when my father was stationed for duty across the sea.  Mr. Montague was a man that absolutely loved the children in his care, including my little brother, his God son, Joshua.

Today I remember Mr. Montague with these words in hope to learn more from others and to celebrate a man, who during his time in my life, left me with so much to process.

In closing I dedicate this piece to his son and one of the most kind and beautiful mothers this life could ever give to us, Mrs. Estela Montague.

Thank you all for your respect and time to share, and to Mr. Montague, you may have passed on in the physical, but you will be present in my mind and thought for as long as I'm alive in this world.

To your spirit we extend our love, our admiration, and hope that we find the strength and heart to carry the pain of losing those we can't imagine living without.